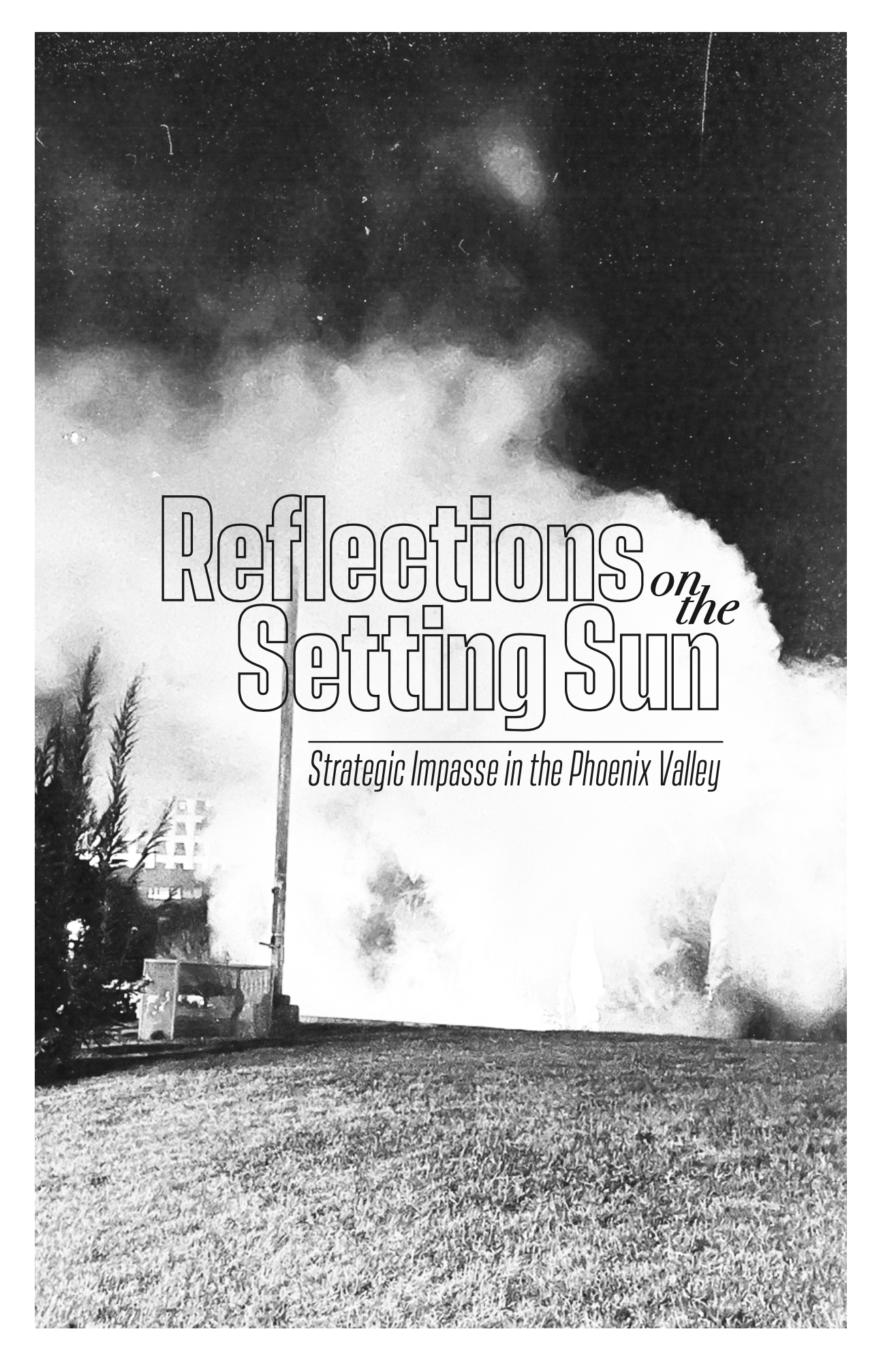 “Finding a way to the horizons presently hidden from us and into the lives that were stolen from us will necessarily take time; what is asked of the insurgent hearts of this vast Sonoran Desert is a practice of experimentation, intentionality, play and imagination. It is a practice of self-creation aimed at subverting the metropolis that keeps us imprisoned, that endlessly fuels itself with the corpses of the immiserated. The ways we relate to ourselves, each other and the world around us must be overturned on the most fundamental level; our approaches and aspirations must reflect that fact. We are — collectively and individually — in a state of always-becoming, unfixed at any given moment by the very necessity of what it means to be alive, and so our approaches must be as well; we need to be engaged in a constant practice of experimentation, evaluation and reevaluation towards a life truly worth living, towards things we never thought possible. In the simple, resonant phrasing of the late Fredy Perlman: anything can happen.” 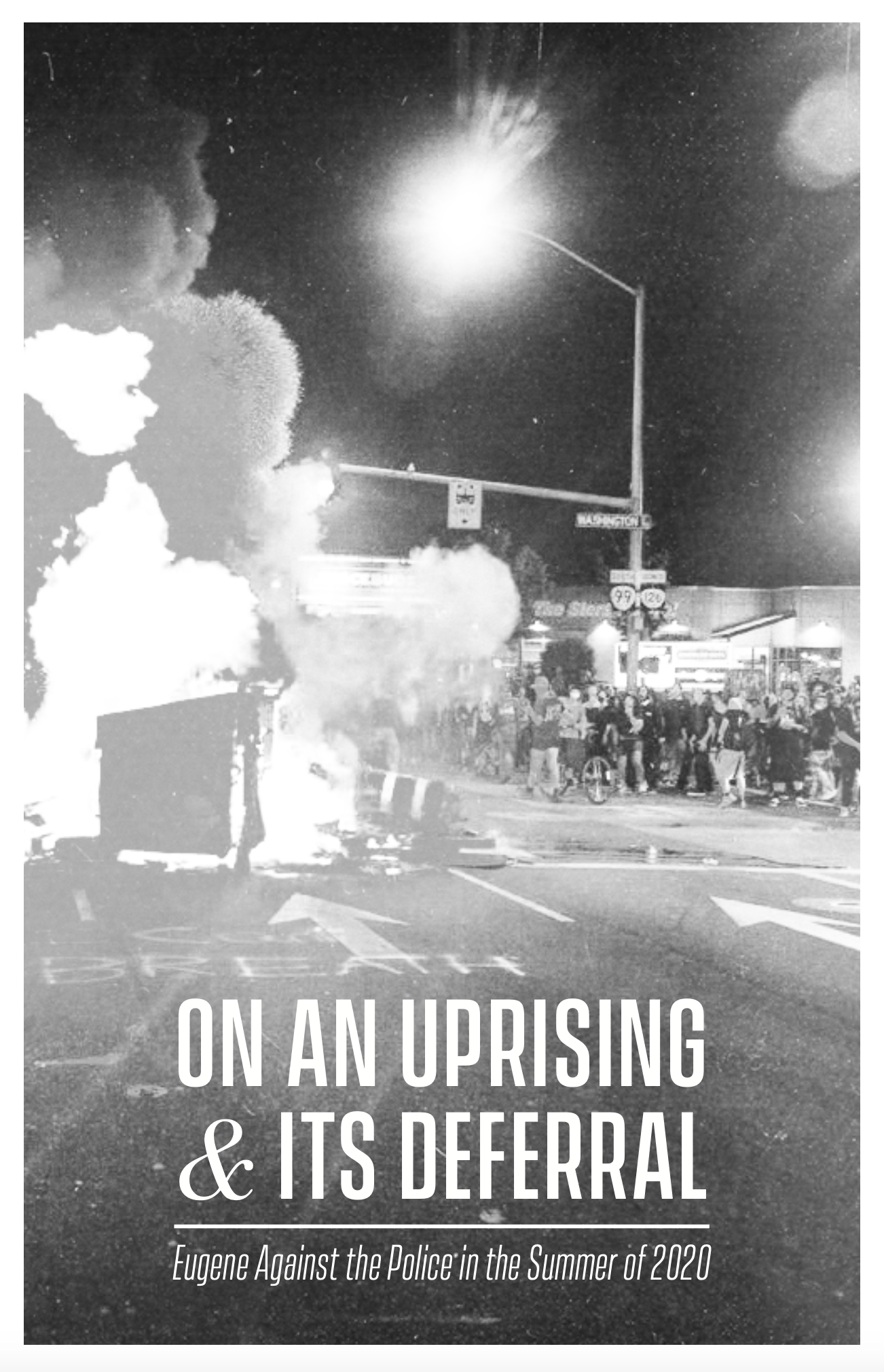 From the middle of a march that felt very different than any other I’d ever attended in Eugene.

From the middle of a crowd unafraid to yell at the cops, to chant angrily, and also unafraid to take pleasure in all the fun things about being rowdy together: shooting off fireworks, dragging signs into the street for makeshift barricades to slow police, and enjoying the open expression of anger itself.

From the middle of the on-ramp to the I-5 where police attempted to disperse the crowd with pepper spray, getting the windows of their cars smashed out by skateboarders in response. The cops squealed off in fear, not to engage again for hours.

From the middle of that intersection on Washington we took over uselessly, celebratorily, for several hours. The one we decorated with countless tags and built a bonfire in the middle of, those excessive gestures that can only be expected from forced shut-ins finally brought out to the street to respond to an anti-Black cop lynching.

And from the middle of a sea of outrage and disavowal produced in the wake of the riot by many so-called radicals after something real finally happening; these counteractions being fatal to the expansion of the rebellion in Eugene.” 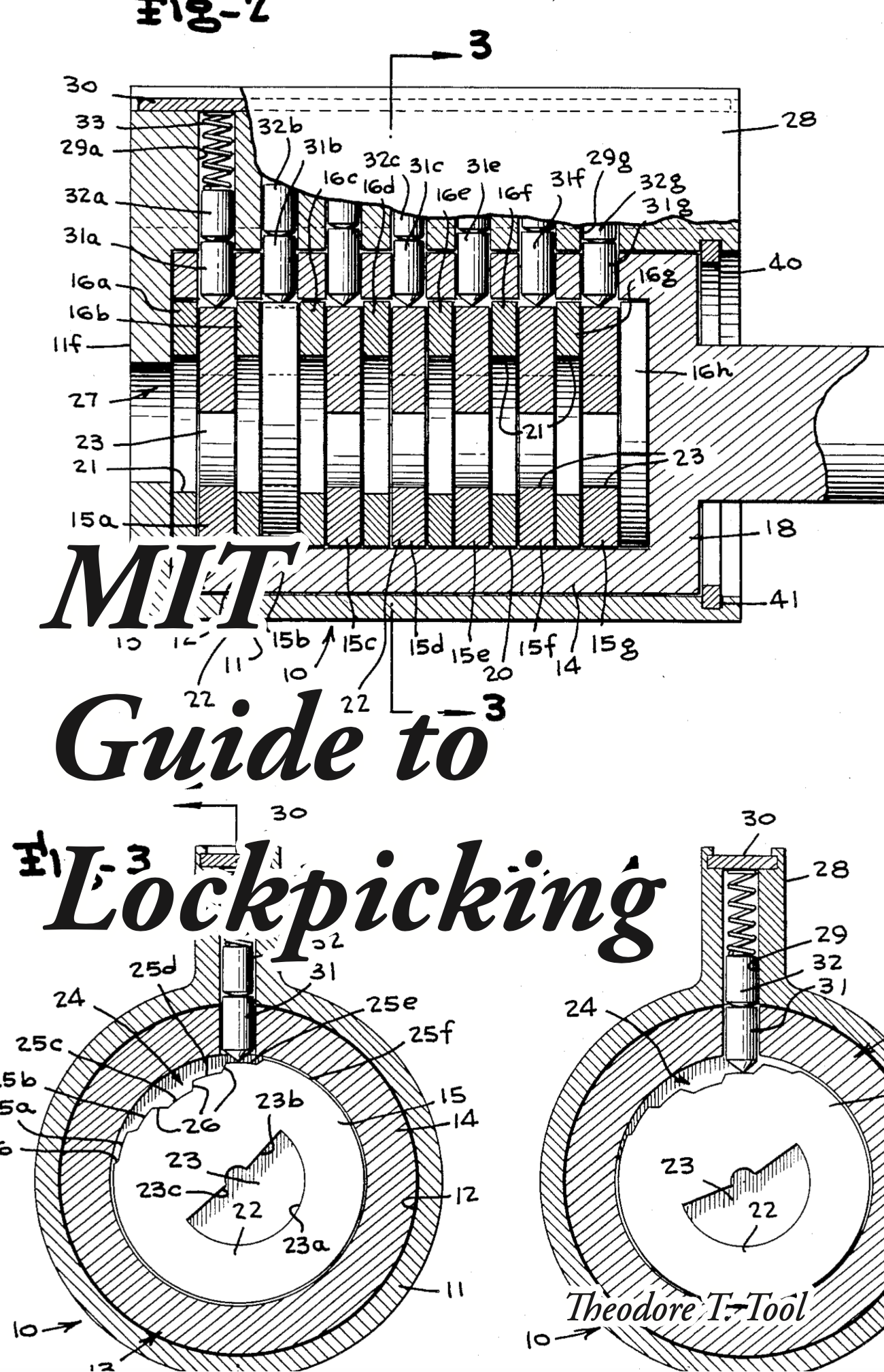 It’s in the title, what more do you want? 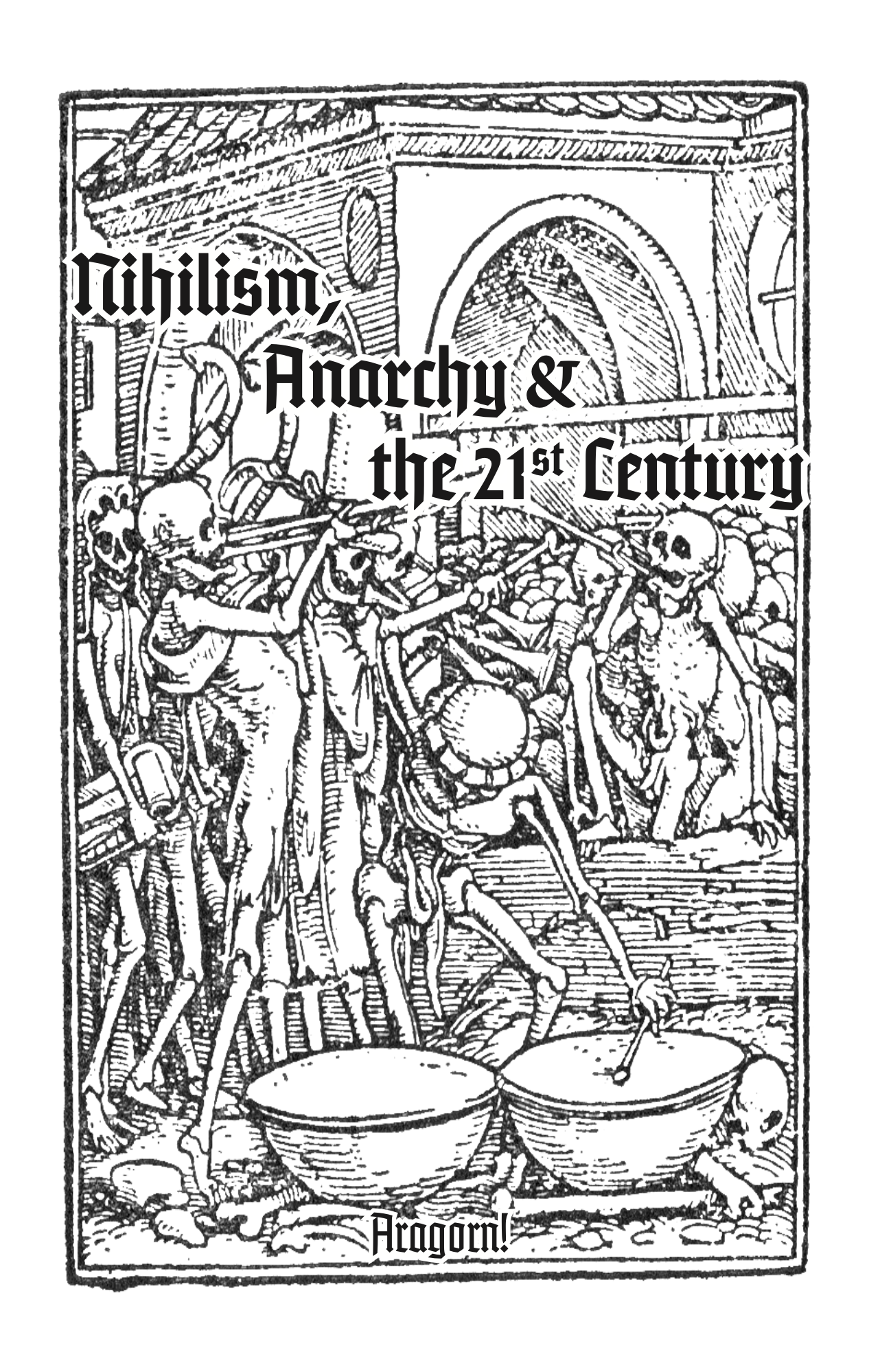 “Anarchists have generally accepted property destruction in their humanist vision of a ethical social change. Things matter less than people. Nihilism informs us that this dichotomy ties us to the world we must supercede, before we are capable of actually having social relationships with people and not things. Strategic nihilism provides us a solution to existentialism and liberalism. It argues for an active pose in this world and for the inviability of reformist solutions. When confronted with the horror of your existence, race towards the bleak consequences, not away. Deal with the moralism explicit in your stated irrelevance by identity politics, communism, and postmodernism with a sword in hand. Moralists should be spared no patience.” 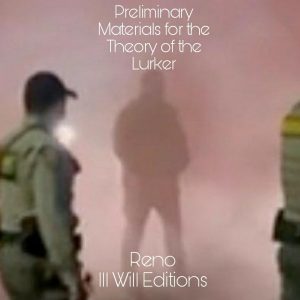 We are proud to repost this piece which was originally posted on Ill Will Editions. We felt there was much to contend with and thought it would serve visitors to our site to ponder some of the points made in it.

Preliminary Materials for the Theory of the Lurker

The Lurker comes to the forefront of contemporary struggle precisely because of their indefinition: a proclivity towards the uncaptureable. At the moment when conspiracies, imagined or real, come to dominate the public psyche, a figure of nebulity emerges. It is a commentary on the inability to define the terrain of State operability for a majority, that an undefinable character emerges to oppose.

The Lurker brings with it questions wherever they appear. “Who is that?”, “When did they arrive?”, “Is this figure friend or enemy?”

The Lurker eludes definitive answers to these questions because they themselves are an answer. It is the Lurker’s mere presence which points to a growing illegibility and “facelessness” of a rupture without end. It is no coincidence that a law passed in the French High Court by the technocratic regime of Macron would include a reference to “all those elements which have not yet revealed themselves” just as The Lurker takes the stage.

The cybernetic intervention of the 90’s and 00’s is reaching its crescendo. As a lived planet burns around us, hollow promises are made of what lies beyond the material, in such new inventions as the metaverse and its accompanying geographies. Agamben said “All that is represented is subsumed by the cybernetic, all that appears solid will tomorrow appear as commodity.” But The Lurker inhabits a unique space between the seen, and the intervening. Though observed, the ambiguity of their appearance does no favors for the manufacture of an image, and the specter of their intervention suggests a dimensionality which we can no longer comfortably refer to as Spectacle.

The Lurker has been seen accompanying scenes of barricades and fire from Hong Kong to Santiago, and in the peripheries of attempts to sketch an exit in space-time, Lurking in the background of mutual aid kitchens and free clinics. Indeed, upon closer inspection, beyond the full-blown partisan, or the web of temporary helpers, the Lurker is the primary figure of contemporary ungovernability. When accounted for, their numbers eclipse those who have a penchant for definition. “We almost got them all, but there were some who we could not identify” laments a Barcelona Police official. The Lurker eludes capture.

Lurking is a particular form of presence that becomes increasingly important once governments begin to concern themselves with power over populations and bodies. Although police can manage the trangression of this or that law, they cannot prevent the way in which Lurking orients bodies to each other and their environments.

Much is to be said of this schism between The Lurker, who becomes the primary figure of the Real Movement towards communism, but the political actors of the Social Movement seldom waste an opportunity to chastise those they feel are not “doing the work.” This is a direct reference to the Lurker, who’s mysterious presence appears to contribute nothing to the situation, but the background of this figure at the margin of the Social Movement, or alternatively, the border of the Real Movement, appears as a gateway to bridging this divide. It would not be easy to reach an accord, but to step into the haze is to step into the margins. 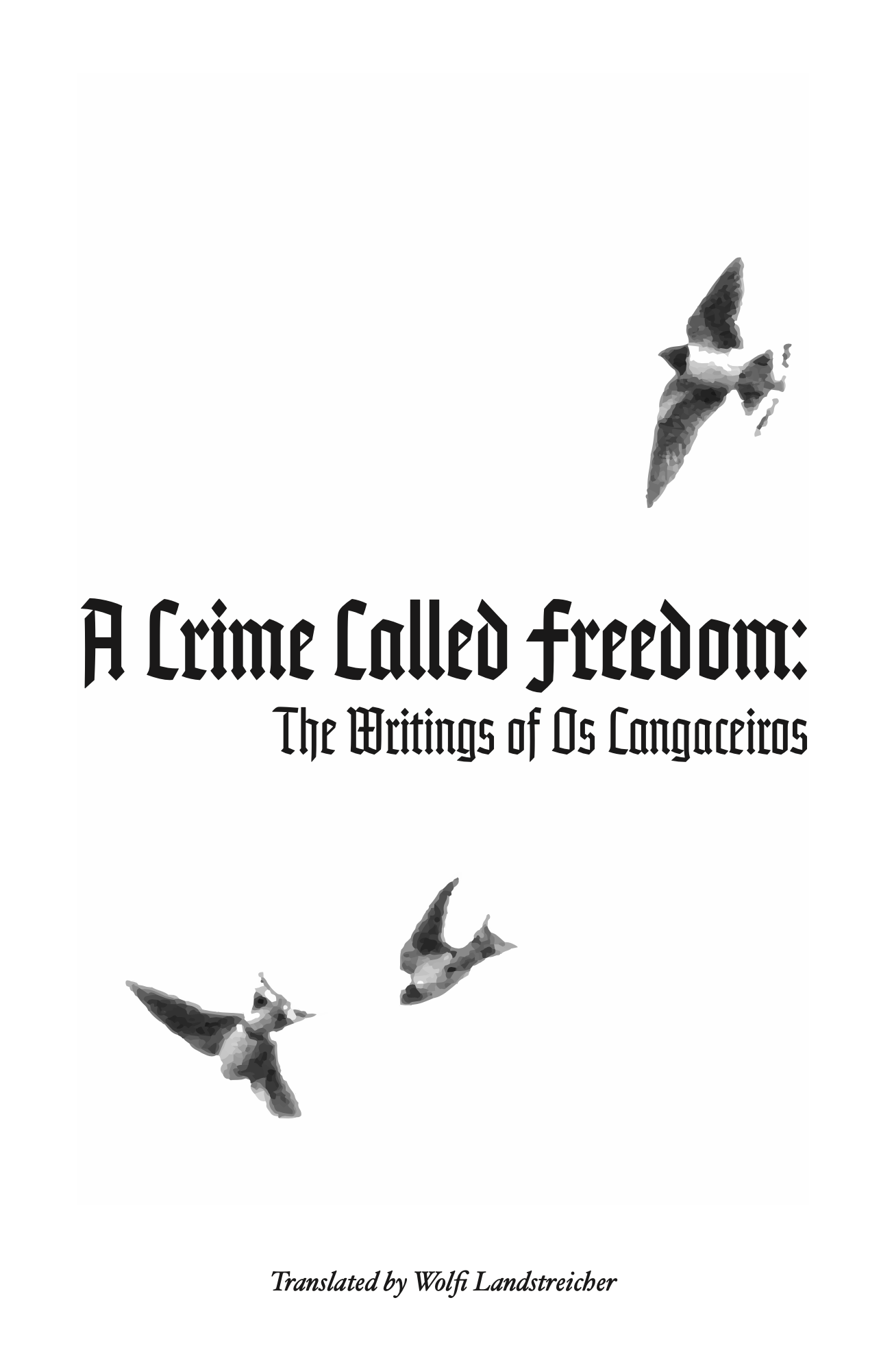 “Os Cangaceiros was a group of delinquents with nothing but contempt for the self-sacrificial ideology practiced by “specialists in armed struggle.” This uncontrollable band of social rebels wreaked havoc on the French state by attacking the infrastructures of oppression, supporting popular revolts, stealing and releasing secret blueprints for high-tech prisons, raiding the offices of corporate collaborators, and creating their lives in complete opposition to the world based on work.” 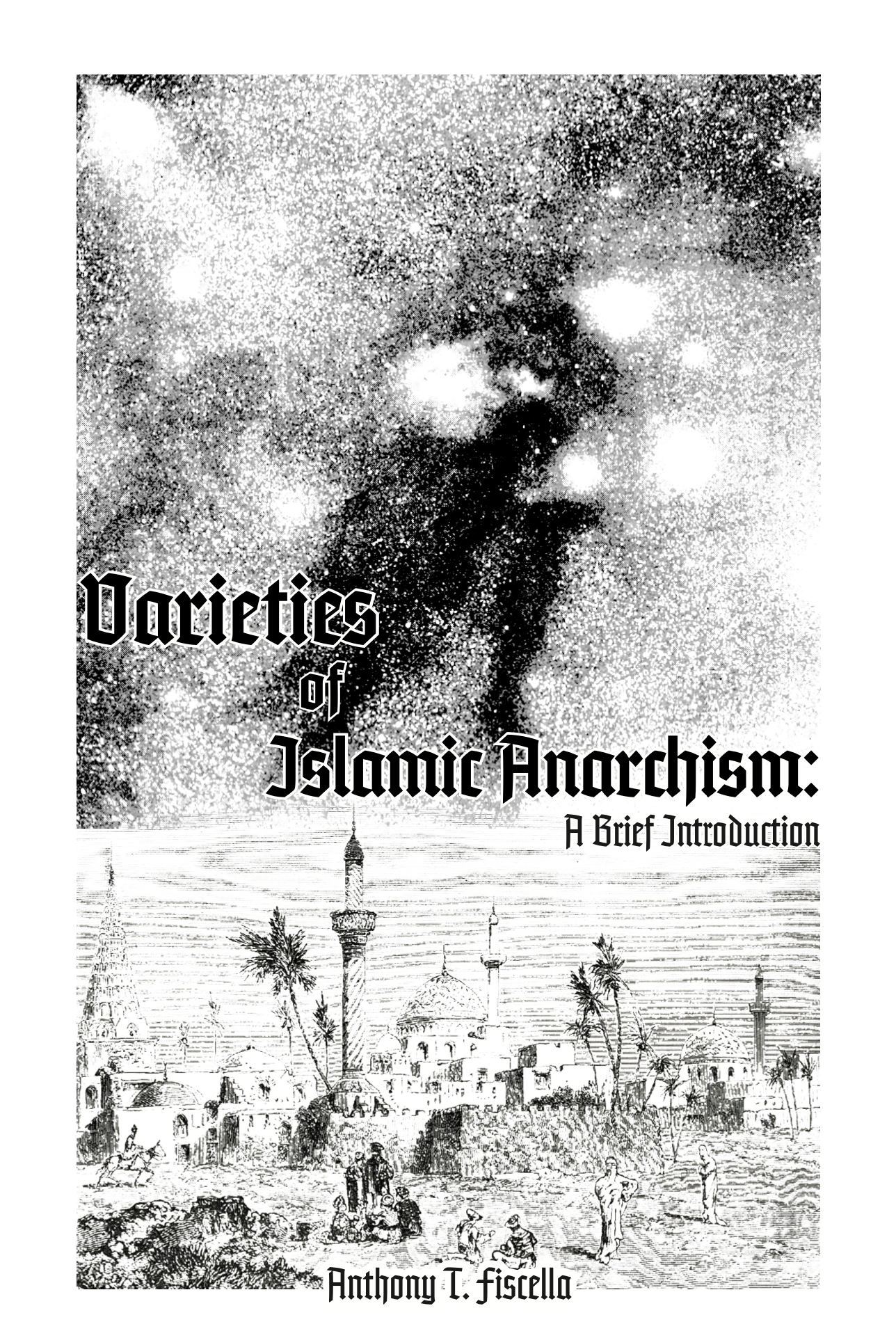 “Your sickness is within you, though you do not realize,
And your cure is within you, yet you do not see.
You claim that you are nothing but a tiny entity,
Yet wrapped up inside of you is the greatest universe.
You are the clear book, through whose letters
All that is secret is revealed and made known.
So you have no need of anything outside of you…” 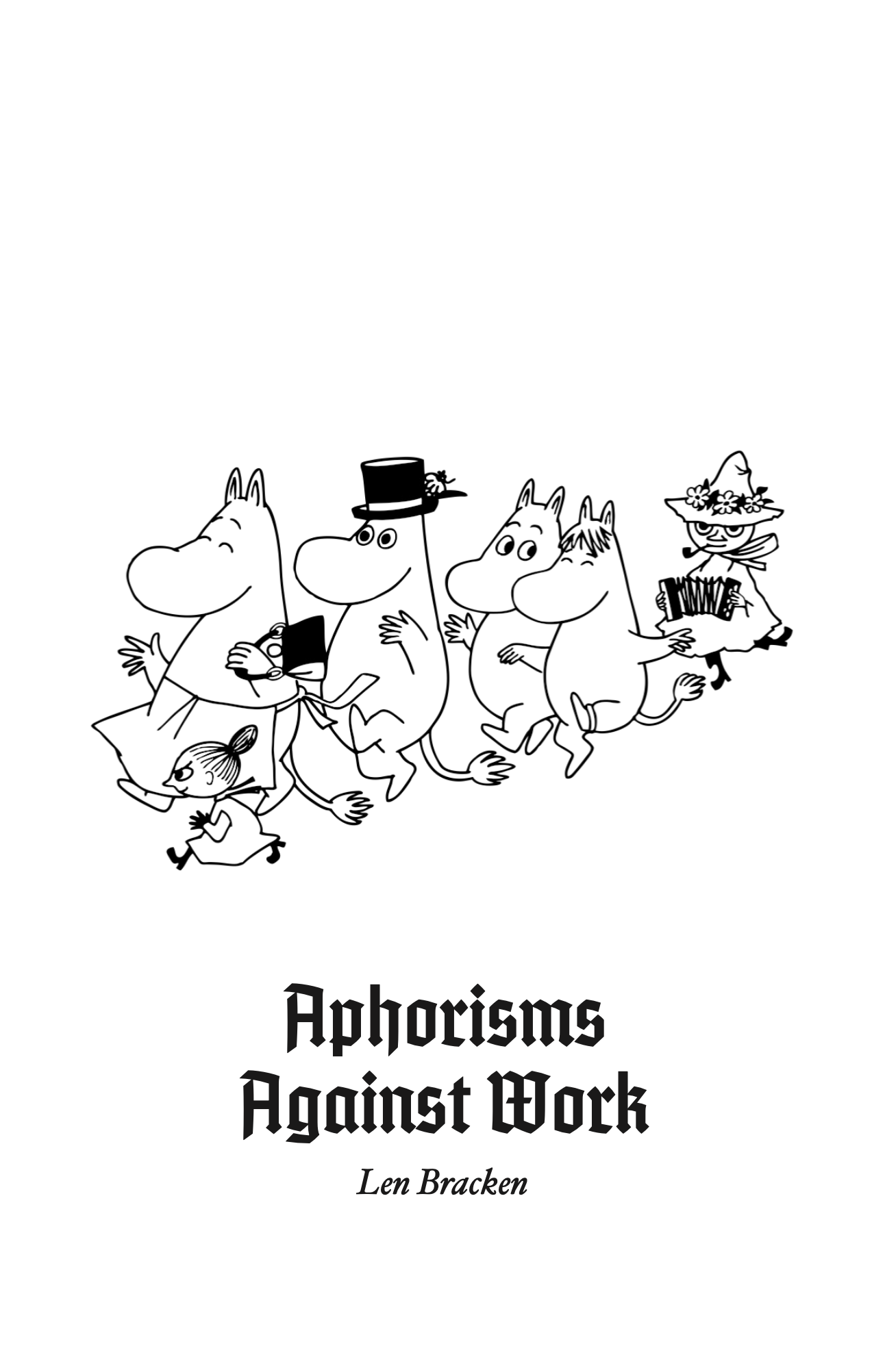 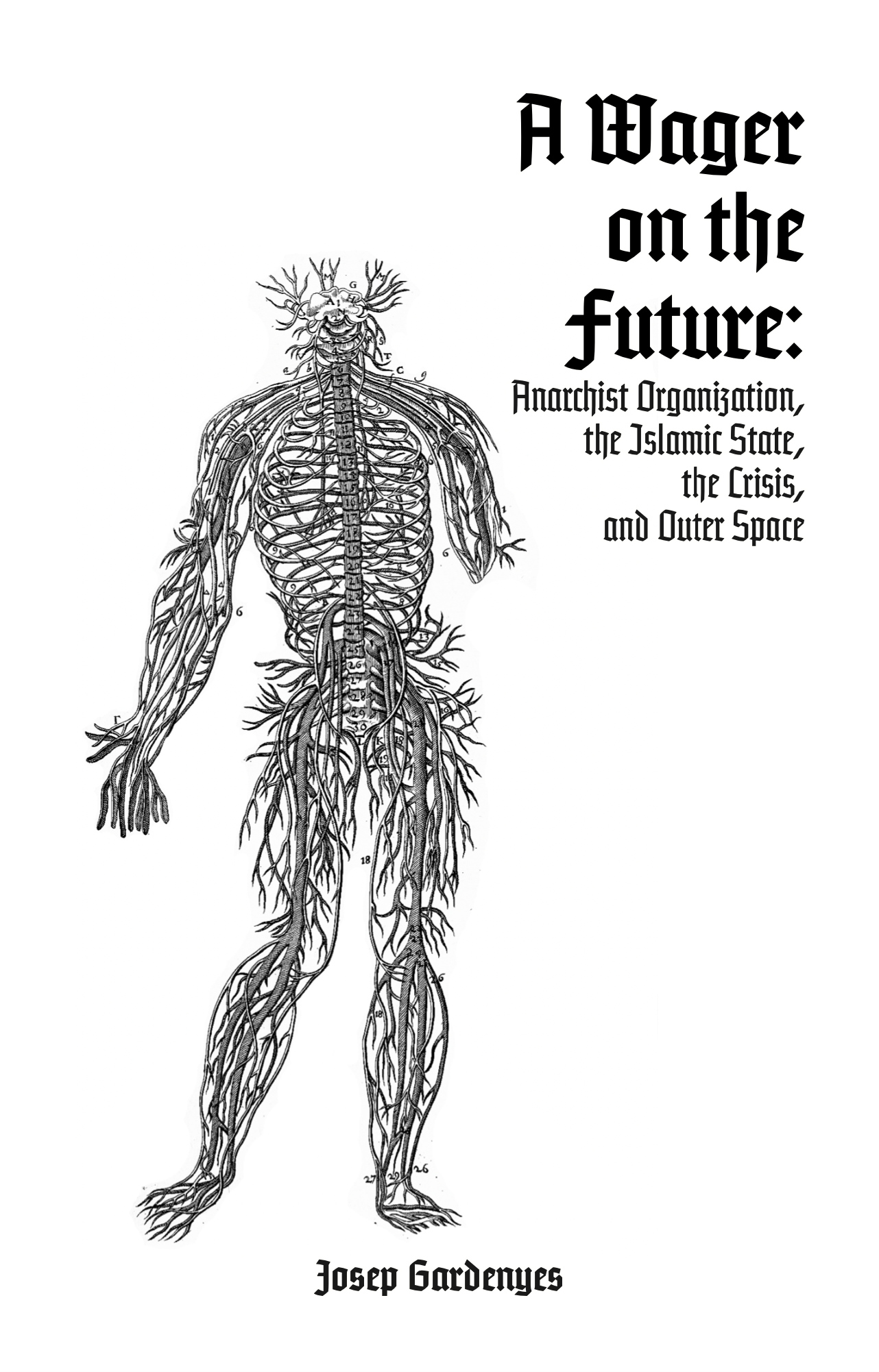 “Ever more comrades in ever more countries have lived through surprising conflicts in which all the sacred lies were questioned, new complicities and broad relations of solidarity were opened up, and the forces of order lost control; but afterwards, everything went on as before, perhaps with a change in the configuration or the disguises of power.

It is true that struggles, as with everything in nature, are cyclical, and we must learn to abide this cyclicity. In that vein, the comrades from CrimethInc. have made a compilation of texts about what to do “After the Crest,” recently translated to Spanish. But the current loss of morale goes much further. We believe we are on the brink of losing our chance of intervening in the conflicts underway and frustrating the attempts of capitalism to adapt itself to the new crises, that flash out worldwide and trans- thematically, crisscrossing the arenas of the ecological, economic, ideological, political, technological, and cultural.

With urgency we must analyze the shortcomings of an anarchism on the rise in the last years. Why is there so little complicity with anarchism’s positive practices?” 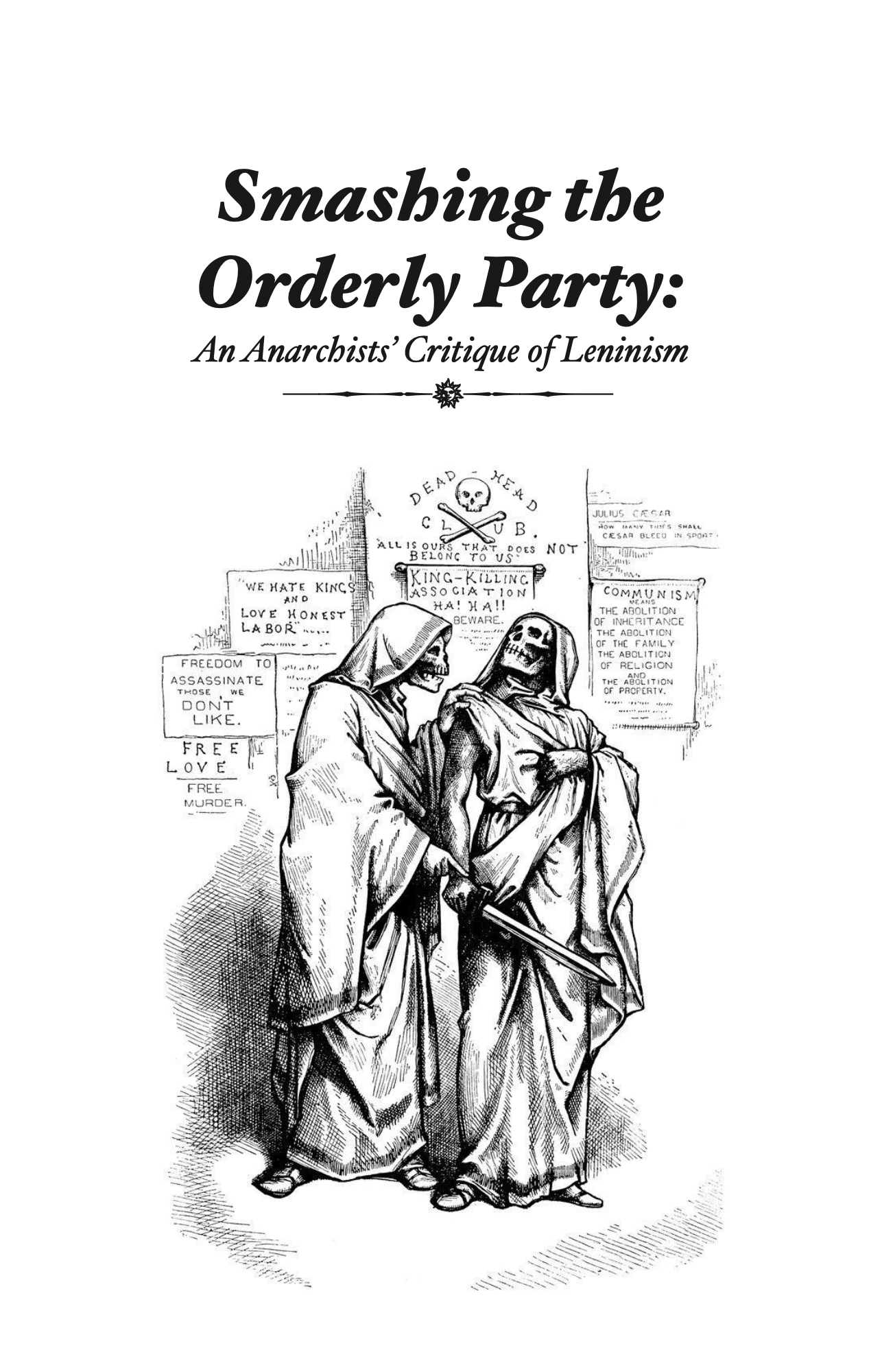 “I would like to write down some thoughts regarding Leninism as a historical and theoretical position. I am writing to those who are willing to listen in hopes of refining a critique of authoritarian socialism. I do not have delusions that this short essay will convince anyone of something drastically outside of what they already believe or at least that is not my intention.

Recently, there has been much debate on listserv and social media sites about an upcoming “Bash Lenin Pinata Party” being hosted by some local Atlanta anarchists. In response to this, Leninists and other authoritarian socialists (including Maoists from other parts of the country) have responded with vitriol, homophobic slanders, and multitudinous critiques of anarchy, “sectarianism,” and “trolling.” I am writing this because I believe that anarchists and anti authoritarians in other parts of the country have had similar encounters with Leninists. The responses I have seen are usually limited to poking fun or reverting to listing-off familiar historical bloodbaths of the Leninist project. I hope to bring a humble contribution to the discussion with the intention of increasing our capacity to meaningfully engage in ideological debate with the Party of Order — be it Leninists, bosses, police, liberals, misogynists or anyone else who seeks to impose discipline on our bodies.

For a wild, uncontrollable, rebellion without object or measure.